The Darwin housing market is relentlessly continuing its decline, even as recoveries occur elsewhere. John Lindeman explains why, and how to pick this market’s turning point.

The Northern Territory is the most sparsely populated state or territory in Australia and seems much too far away for most investors to get excited about, especially with its house market on a seemingly endless downward spiral. Yet back in 2009 Darwin’s median house price was on a par with that of Sydney as the graph shows and its rental yields were the highest on offer in any capital city. 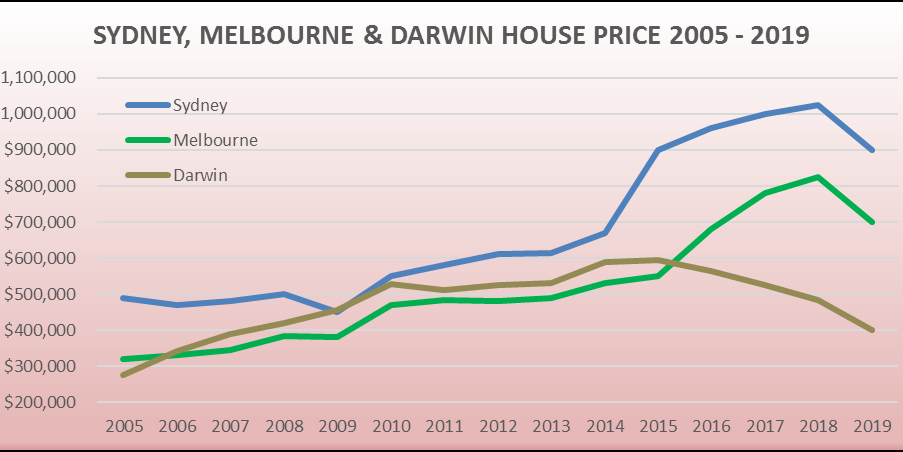 The dramatic rise in Darwin’s housing prices at the start of the current millennium led many experts to assume that this was connected to the coal and iron ore mining boom which was occurring at the time.

In more recent years, the population of Darwin has been falling and there was a net loss of over 1,000 residents to other States in the last year, but what is behind this exodus? Could it really be due to the end of the mining boom or is this a classic false correlation and there’s actually something else that’s causing people to leave, and leading to a decrease in housing demand?

The Northern Territory economy relies on mining for over 16% of its economic output, but there has not been any decline in demand for its minerals in recent years which would explain Darwin’s fall in population. In fact, demand for the Territory’s non-ferrous and high-technology minerals, fertiliser commodities, gold and uranium have grown in recent years.

Demand for oil and gas has also risen, even though Darwin acts only as a support hub for the oﬀshore oil and gas ﬁelds located along our northern coastlines and these operations have little impact on the local housing market.

The secret to Darwin’s housing market performance is that it is the defence capital of Australia, the embarkation point and logistical supply and support centre for virtually all of our overseas military, peacekeeping and border security engagements. Every service person stationed overseas requires the support of ten logistics personnel back in Darwin and so housing demand swells there whenever we have large scale overseas commitments and then it quickly declines again when they end and the personnel leave.

Our successive and significant defence and peacekeeping commitments grew rapidly from 2000 onwards, with 6,000 military and police personnel deployed in East Timor and over 7,000 personnel stationed in the Solomon Islands from 2003.

Thousands of military personnel were also engaged in warfighting operations in Iraq and Afghanistan. These deployments propelled the Darwin housing market upwards as the troops were rotated in and out of Darwin, with support personnel and their families making Darwin a temporary home.

More recently our defence forces have been deployed in the north to combat smuggling and prevent illegal immigration under “Operation Sovereign Borders”. We have participated in international stabilisation efforts in Afghanistan and operations to counter Islamic State, but these commitments have now declined, resulting in the current fall in the city’s population and a decline in Darwin’s housing market.

Property investors were drawn to Darwin from the early years of the millennium because of the high rents on offer, but with the result that nearly half of all dwellings in Darwin are now investor owned rental properties. When you compare this to the rest of Australia where only one third of dwellings are investor owned, it is easy to see that the high percentage of investor owned properties gives this market its volatility.

While rent demand was rising, rents also increased and investors competed to buy properties. This resulted in high price growth, but when rent demand started falling prices followed, as investors tried to sell their empty properties at the same time.

Only new defence, peace keeping and border security commitments operated in or from Darwin will turn this housing market around, so canny investors will keep an eye on possible changes in our overseas commitments as it is the presence of personnel in Darwin who are associated with our overseas military, peacekeeping and border security activities which underpins demand for housing in the city.